This post is being written by Craig's partner (and fiance), K.J.

Craig is sick.  Period. He's been fighting this cold, sinusitis, or whatever in the hell it is for a couple of weeks now.  When he got to our home in Texas a week ago, he was REALLY sick.  So, I did what I know to do - I had a pot of homemade chicken tortilla soup, fridge stocked full of apple juice, and overdoses of vitamins ready and waiting for him.  Knowing that we were leaving on Friday to come to Hawaii, I just KNEW that my special brand of love and red-neck nursing skills would have him up and running in no time.

He did get to feeling better by the time we left, but in no way was he one hundred percent better.  This of course, resulted in him unable to equalize his head pressure on the flight to the islands and caused him insufferable pain.  OK - it was tolerable, but I could tell from the look on his face that it was very painful.  Trying to not put a damper on our vacation, he has pushed himself to his physical limits the last few days and it finally culminated in his getting pretty run down last night.

Hence, no post from him last night.  So, in order to keep his blog going, I am writing yesterday's post for him (albeit a day late - nobody's perfect).

In the last two years that I have known and grown to love Craig, I have learned a few things about him.  I have also learned a few things about myself, too.  But, this blog is about the man that I intend to marry; so let's look at him.  Craig is an 'all-or-nothing' kind of guy.  It either is, or it isn't.  There isn't much in between.  Last night he knew that he was going to bed without writing his daily blog post and it upset him terribly.  But, he really just didn't have the physical strength to do it.  This morning when he woke up, he said that he was done with the blog.  Since he didn't write last night, he was just going to give up on the whole idea.

So, this is where I come in... I am one of those crazy supportive people.  If he told me that he wanted to quit his job and become a basket weaver, I would do everything possible to support him in that.  Whatever he wants to do that will make him happy, I am going to support.  BUT - once the decision is made and the course laid out and set, that's it - no deviation in my mind.  I will push for success (I am the same in my own life.  I don't know how to fail.) in the endeavor.  So, with him sick on the couch in our condo, I convinced him to let me post the blog for yesterday.  Again - this endeavor must not fail.

So - I ask you...  Who's sick?  Is it my future husband, who gets discouraged and has the ability to gracefully admit defeat and move on to the next worth-while project?  Or is it me, who will put blinders on and plow forward to finish a project, no matter the personal cost?

Maybe neither.  Maybe both.

Yesterday Craig pointed out something to me about the ocean I've never really noticed.  As a wave approaches the shore, a lot of them crest on opposite sides at the same time and gradually curl over, eventually meeting in the middle in a beautiful display of completion.  Perhaps it is in nature that we can all learn a few things.

So I think I know what my new project is:  Understanding these things about both of us and doing my part to try to meet him in the middle of every situation and encourage him to meet me in the middle of them as well.  I think that is one of the most important points of being in a relationship:  to see your faults in the strengths of you partner; to assimilate the best parts of them into yourself, and by so doing - become better in the process. 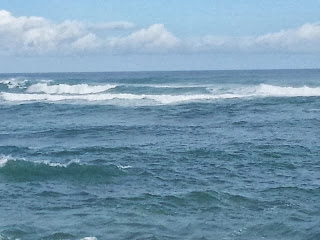